The name 'Pushkar Fair' and "Pushkar ka Mela" gets many buyers both in India and the World as a whole. India, being a country of age old religions, countless temples and shrines and the rituals attached to them is home to thousands of fairs that occupy every season in a calendar year. Pushkar fair is one of the biggest events in India. And for a fair in India, it takes to be much more than just average to stand out. The significance of Pushkar Fair is many faceted which is closed intertwined with the unique features of the town of Pushkar. Situated near the famous city of Ajmer in Rajasthan, Pushkar is far away from the din and bustle of a modern city.

On record, Pushkar fair is World's largest camel fair where around 50,000 camel are gathered. The entire fair can be segregated under three main heads with a few sub heads. The first is the Cattle Fair. Apart from the camels, animals like horses, cows, sheep and goats are being traded here. Further there are competitions among the colorfully decorated camels where the winner camel is prized healthily. Second comes the Cultural Fair. In this segment the stalls and shops catering both to human and the cattle are set up in the fair site. Clothing, jewelries and tattoos carry an ethnic charm with a typically Rajasthani aura. Besides it, the hugely versatile cultural repertoire of Rajasthan comes alive in Pushkar Fair in form of folk dance, music, puppet shows and so on. 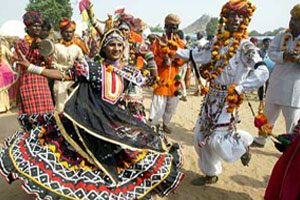 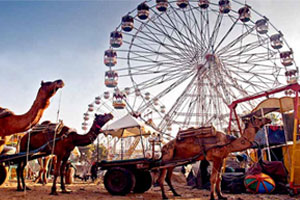 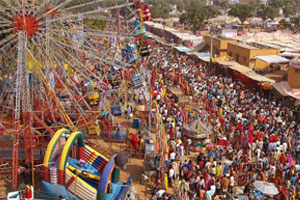 On the final day of Pushkar fair is for a holy dip in the mythological significant Pushkar Lake. The Pushkar Fair is gaining more popularity with the passage of time and has been attracting more visitors. Presently, the number of visitors stands at a jaw dropping 185000! The eternal call of the state of Rajasthan and the uniqueness of the fair are the main factors that are helping it grow and grow more. The Pushkar Fair blows open Rajasthan for the travelers. Don't miss the opportunity to be part of the upcoming Pushkar fair and the culture of this historic place in India. Pushkar Fair celebrated in Pushkar. Pushkar fair is World's largest camel fair where around 50,000 camel are gathered. Pushkar, the only place which has the sole Brahma temple in the whole world. As per Hindu traditions Brahma is considered to be the Creator of the Earth. He started it from Pushkar therefore it is one of the most sacred towns of India and has a beautiful lake as its prime attraction. Pushkar is also reckoned for its Global Cattle Fair especially the Camels and on papers this is the place which sees the largest conglomeration of cattle’s worldwide.