11 km north-west from Ajmer, in the state of Rajasthan, on the desert fringe lies a tiny tranquil town called Pushkar, along the bank of the picturesque Pushkar Lake. One of the holiest and oldest cities of India, Pushkar is a favored destination for thousands of tourists and devotees. As per legends, Pushkar boasts of over 400 temples, ghats and palaces revealing an entirely different picture of the city. An important pilgrimage spot for the Hindus, Pushkar is home to the only temple of Lord Brahma in the country as well as the world. Lord Brahma is known as the creator of the world, as per the Hindu mythology.

Pushkar is situated at a height of 510 meters, surrounded by hillocks on three sides. The 'Nag Pahar', or the Snake Mountain, forms a natural boundary between Ajmer and Pushkar. The sleepy, lakeside settlement of Pushkar is of great mythological significance. According to Hindu mythology, lotus petals incidentally fell from the hands of Lord Brahma on the ground at three places, from where water immediately sprouted, which lead to the creation of three lakes, Pushkar Lake, Madya Pushkar Lake and Kanishta Pushkar. Pushkar is one such place where Lord Brahma performed “Yagna”.

Pushkar Camel Festival is the best time to witness the kaleidoscopic picture of this part of Rajasthan. The riot of colors and liveliness is evident from swirling dancers, tented camps, intricate artwork and towering camels. Thousands of Hindus from across the globe come to Pushkar to take a dip in the holy waters of Pushkar Lake. All in all, Pushkar radiates an ambience of peace and spirituality that casts a lure to visit again and again. Visit Pushkar and catch a glimpse of the unrevealed part of this otherwise drowsy and quiet town begetting a legacy of timeless architectural heritage. 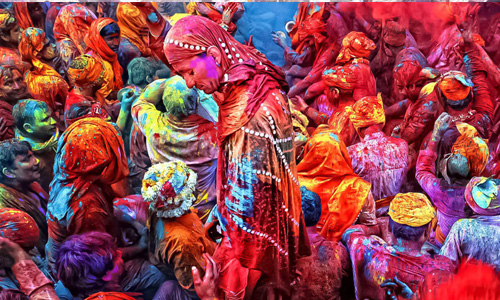 There is various type of Holi played around the country and Pushkar Holi has got different identity among all the Holi played in India. Holi is the spring festival of India, celebrated by playing with vibrant colors. The colorful festival is the wonderful opportunity to reconnect with the family and friends by applying colour on their faces. Not only Local people but foreign tourist especially people from Israel take participation in Pushkar Holi with great enthusiasm. During the festival, people smear color on each other’s face and splash water, playfully. The festival is known for the generous use of colors, which are produced both naturally and artificially. While gulal is the main color of the festival, which is available in vibrant pink shades, red, green and yellow, other colors, which are a bit hard, have also occupied the market shelves. 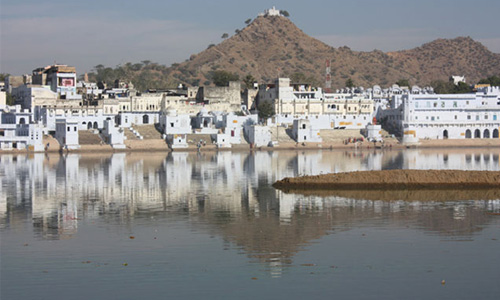 Located in the small town of Pushkar in the Ajmer district of Rajasthan, The Pushkar Lake is one of the most prominent spots of pilgrimage as well as the site of the world famous Pushkar Fair. Encircled by numerous temples and ghats (bathing spots), the lake draws thousands upon thousands devotees every year to its threshold, to gain spiritual distinction and attain salvation by taking a dip in its holy waters.As the Kartik (Oct-Nov) month descends, the site becomes the focus of soulful devotion and pilgrimage as auspiciousness of this time is highly emphasized in Hindu sacred texts. At the same time, Pushkar Fair wonderfully exhibits the vibrancy of Rajasthan with exotic colors, dishes, dance, cattle fair and numerous entertaining contests and competitions. With amazing spiritual atmosphere, Pushkar Lake remains the site of timeless reverence and spirit. 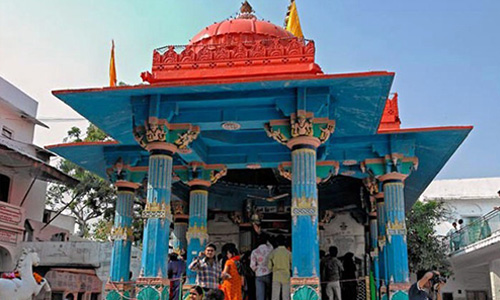 Brahma Temple in Pushkar is one of the most famous and only few of the temples dedicated to Lord Brahma in the holy city of Pushkar, Rajasthan. This Pushkar Brahma Temple is the place of deep spirituality and thousand of devotees come here to pay homage to the many gods that reside in this temple town. Pushkar city has over 500 temples with the main Pushkar temple. It is dedicated to lord Brahma and the only Brahma temple anywhere in the world. Although the structures of the temple dates back to 14th century but it is believed that the temple is about 2000 years old.

Brahma Temple Pushkar Timings : 6:30 am and 8:30 pm during winter and 6:00 am to 9:00 pm during summer . Three aratis are held in the temple: Sandhya Arati in the evening about 40 minutes after sunset, Ratri Shayan Arati (night-sleep arati) about 5 hours past sunset and Mangala Arati in the morning, about 2 hours before sunrise. 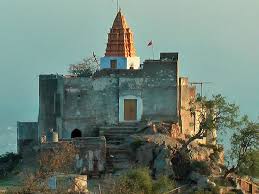 Settled atop a hill in Pushkar, Savitri Temple is one of the most renowned and sanctified spots. The spiritual significance of the temple attracts huge number of devotees from all parts of the world, despite the fact that the temple is on a hill top.Moreover, the holy shrine constitutes a major portion in making Pushkar as an important pilgrimage destination. The Savitri temple in Pushkar boasts of a notable and striking architecture. The excellent design of the temple would surely make you wonder about the amazing skills of craftsmen of past times.

According to Hindu Mythology, the temple name ‘Savitri’ itself narrates an important story behind. A yajna was performed by Lord Brahma where his wife Devi Savitri couldn’t reach on time. Hence, in order to perform the pooja timely, Lord Brahma completed the ritual with the help of a local girl, Gayatri- who then became the second wife of Brahma. All this made Devi Savitri very upset and angry.Later, in order to please her, the shrine was dedicated to Devi Savitri. Also, the arti (worship ceremony) is performed first in Savitri Temple and then in Gayatri Temple. The deities of both the goddesses are kept in the Savitri shrine. 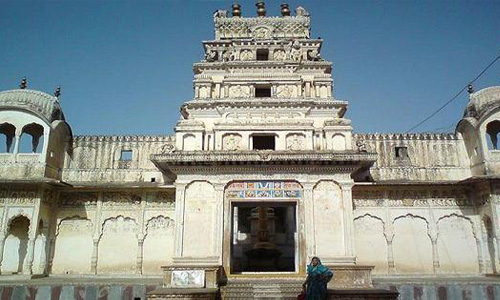 One of the most popular temples of Pushkar, Old Rangji Temple reflects a mesh of Mughal and Rajput architecture. The high-rising Gopuram also reflects South Indian architecture, and adds more charm to the whole temple.This 150 year old Hindu Temple is dedicated to Lord Rangji, an incarnation of Lord Vishnu. Seth Puran Mal Ganeriwal of Hyderabad commissioned the temple in 1823. Along with the idol of Lord Rangji, idols of Lord Krishna, Goddamaji, Shri Ramanujacharya and Goddess Lakshmi are installed inside the temple complex. 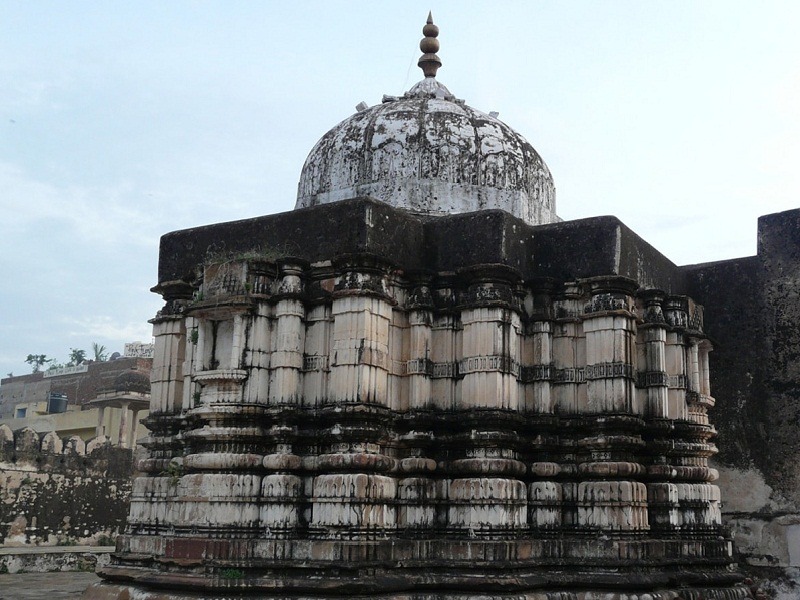 Dedicated to Varaha, Lord Vishnu’s incarnation in the form of a wild boar, the Varaha Temple was built back in the 12th century by King Anaji Chauhan. It is believed that major part of the temple was destroyed by the Mughal Emperor Aurangzeb. The temple was renovated by Raja Sawai Jai Singh II of Jaipur in 18th century.According to the legend, Lord Vishnu took an avatar of half boar-half man while he was coming to the earth to slay the demon -Hiranyaksha, who threatened to destroy all life. Lord Vishnu had also killed his elder brother, Hiranyakashyip. This is why; Lord Vishnu is called the Preserver in Hindu mythology. He took on many avatars to slay demons and kill all evil to preserve peace on earth. It is believed that he took 9 such avatars, one of which is Varaha. The temple is dedicated to honor the same avatar of Lord Vishnu.The temple houses a huge idol of Lord Varaha which is white in color. Other than this idol, there are many sculptures, carvings, gold styled pillars depicting Garuda, the mythical bird and life-size statues of door men in the temple